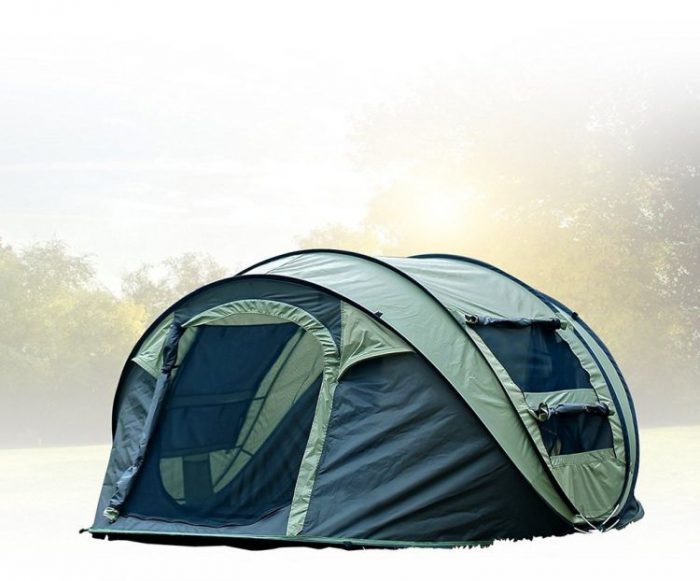 Pop up tents are popular because they can be set up within seconds. The fly in the ointment is packing a pop up tent. Even the best pop up tents can be troublesome to pack. It doesn’t have to be that way. Knowing how to fold a pop up tent can take some practice, but once you’re familiar with the basics, things get easier.

How To Fold A Pop Up Tent — The Preparation

When starting your pop up tent packing, the first step is to remove stakes and guylines. Remove any tent pegs/stakes and pack them away. Next, fold the guylines and put them in place. It’s likely they’ll be attached to the tent, so fold them up and tie them to their location.

When you fold a pop up tent, all the air in the tent will need a place to escape. Keep the tent door open so the air can escape. This will make things easier and reduce the chances of you wrestling fruitlessly with an air pocket in your tent.

Lining Up Frame Parts Of The Tent

When folding a pop up tent, the first thing to do is line up the frame parts. Start with folding the top two poles together. Stand at the side of your tent, and grab a hold of the top two poles. Now bring them together, so you can hold them in one hand.

Make A Vertical Taco Out Of The Tent!

Once you’ve got the top two poles together, move the tent around. The tent poles you were holding are now pointing towards you. In other words, one of the tent walls will now be on the ground. With you holding the top poles together, the tent will look something like a giant taco standing vertically!

Hold the top pole, and fold it backwards towards the poles you’re already holding with the other hand. As you fold the tent and push it down, you’ll be left with two frame circles on the ground. Remember not to remove either hand from its position, or the tent will start to pop up again and you may have to start from the beginning.

Once you get the two frame circles on the ground, you may notice they still have air. If necessary, push the air out gently and let both frame circles flatten. Now, push one frame circle over the other, and your job is done. Voila!

Many tents have a velcro lining or similar mechanism to hold them in place once they’ve been packed. If your tent has one of those, put the lining in place and pack the tent in its bag. There you have it.

Practice With Your Tent Before You Camp

Folding pop up tents can seem frustratingly difficult, but once you get the hang of it, the job becomes easy. While the process is fairly simple, it requires some effort and dexterity. It’s one of the reasons you may have seen people struggling to pack their tents for hours. This is also why some people abandon their pop up tents rather than packing them away.

A Better Way Learn How To Fold A Pop Up Tent

Doing some practice will better prepare you for packing away your pop up tent. It’s also worth noting that some tents may require a different approach. Most pop up tents can be folded by following the steps listed here. However, not all tents are the same. Start with your tent manufacturer’s instructions on how to fold a pop up tent. This way, you can be sure it doesn’t need a different approach or additional steps.